This lab is equipped to conduct joint research projects with industry, giving students the opportunity to apply state-of-the art technology in real-world problems. Dr. Zhiqiang Gao’s research has recently been selected to be featured on the Ohio Innovation Exchange. Industrial automation has been dominated by the PID technology for over a century until now. The new kid on the block is called active disturbance rejection control (ADRC), patented by Prof. Gao’s group at the Center for Advanced Control Technologies (CACT) and commercialized by the CSU spinoff company, LineStream, founded in 2008 and acquired by Danfoss in 2018. CSU received a royalty payment of $100,000 this year and for years to come. Companies such as P&G, PPG and Samsung have also donated generously to support the cutting-edge research at CACT, leading to significant energy savings in server farms, thermal power plants, extrusion processes, motion controls and more. Faculty: Zhiqiang Gao

ECSYL focuses on the theoretical development and real-time implementation of control and signal processing algorithms. Theoretical directions that are of particular interest include optimal control, Kalman filtering, H-infinity control and estimation, neural networks, and fuzzy logic.

This three-year research project will aim to address:

2. Ridesharing optimization needs to match drivers and riders on short notice, or even during a commute; this is called dynamic ridesharing.

3. If ridesharing is to be successful, then it must be widely adopted, which means that the optimization problem will include an extremely large number of dimensions.

In August 2018, Dr. Dan Simon  Research focused on developing a pediatric exoskeleton. Simon and his colleague, Dr. Sawicki, are collaborating with Parker Hannifin and the Cleveland Clinic to develop a pediatric exoskeleton, which could provide much-needed therapy and restored walking ability for children with cerebral palsy. Click here to watch. Faculty: Dan Simon 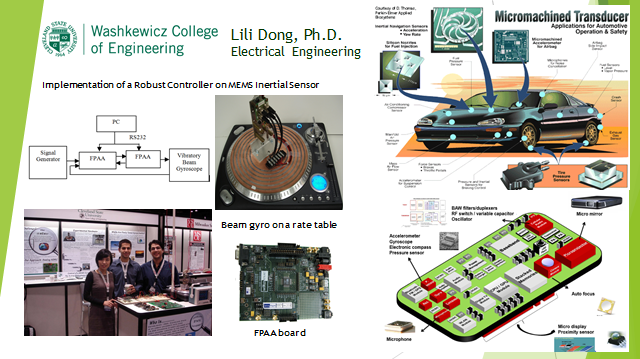 MEMS research lab has provided focus and support on development of nanotechnology and sensor design efforts.

National Science Foundation supports the EECS faculty’s project "Transactive Uncertainty and Flexibility for High Penetration of Semi-dispatchable Renewables in Electricity Markets." This research focuses on improving the reliability and fairness of the electricity market as variable energy resources (VERs), such as solar and wind, become more prevalent in the power generation landscape. The robust model that being developed will actively manage the uncertainties of demand by users and supply by VER generators. By managing uncertainties and including explicit energy pricing signals, the model has the potential to enable broader adoption of distributed renewable energy sources. Faculty: Lili Dong