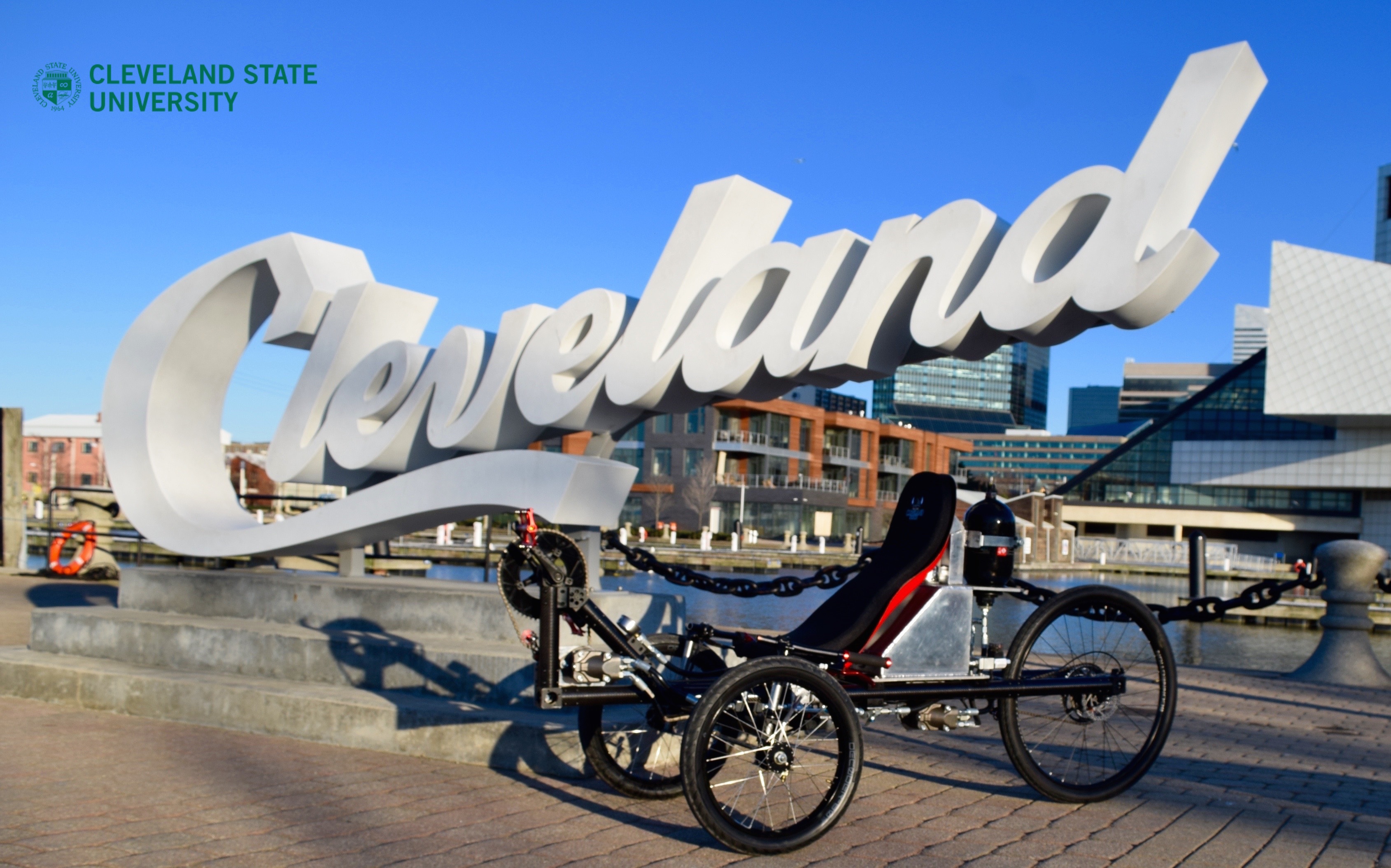 It was a year of change in the Fluid Power Vehicle Challenge, but the result was the same. Students from Cleveland State University’s Washkewicz College of Engineering won the overall championship for the second year in a row.

The students’ bicycle that runs on hydraulic fluid power bested bikes from 14 other colleges. The contest was conducted in April through remote virtual testing and presentations, after the COVID-19 pandemic ruled out having the teams meet in Colorado.

The National Fluid Power Association “did a nice job of accounting for changes in the schedule due to the virus,” said Jacob Landry, who was on the team of seniors along with Ellen Rea, Angela Rodriguez, Sarah Smith and Naik Yusufi. “We were still able to present our work in its entirety and we’re really proud of that.” See video of vehicle in action here.

Ordinarily, there are three races of different types that test the vehicles’ speed, endurance and efficiency, in addition to a presentation of the team’s work. This year the racing was done through test data submitted to the judges.

“We didn’t miss anything besides having a crowd,” said Assistant Professor Bogdan Kozul, the team’s adviser. In all categories, he said, Cleveland State “had the best design and implementation. These other teams did a great job. The CSU bike was an engineering marvel with the all the project constraints.”

Kozul said the CSU bicycle was the first in the challenge’s 15-year history that used a carbon fiber frame built specifically for the competition, instead of aluminum, steel, or carbon fiber from a stock bike.

The main advantage of that was reducing the bike’s weight, “but it’s also very durable, strong and stiff” so the frame stays in place, said Yusufi.

The frame supports a bracket behind the rider that holds the hydraulic reservoir, the accumulator that stores the energy and the hydraulic motor. “We were able to integrate many component mounts into the hydraulic reservoir, so we didn’t require a bunch of separate brackets,” said Rea. “Through doing that, we got rid of some weight and also made everything more streamlined.” The bike weighs 171 pounds and has a top speed of 27 mph.

The vehicle boasts several riding modes including a direct pedal drive similar to a traditional bicycle. The rider can also charge the accumulator by pedaling, and use the stored energy to power the bike without pedaling. The accumulator can also be charged with an electric drill, and it’s charged by regenerative braking. “While the bike is stopping, you’re using the inertia of the rear wheel, that’s already turning, to force fluid into the accumulator,” said Rea.

“The really cool thing was that we fabricated a lot of the parts of the bike ourselves,” said Yusufi. “There was a lot of design involved and fabrication of even minor parts.”

The work involved “everything from welding to machining to computer modeling,” said Landry. “It was a really good summary of a lot of the things we’ve learned in school as a whole.”

Before winning two years in a row, CSU finished second in the Fluid Power Vehicle Challenge in 2018. Kozul -- who came to Cleveland State from Mayfield Heights-based Parker Hannifin Corporation, which started the competition and ran it until the NFPA took over – has a plan to keep the success rolling. “We’re bringing in a lot of underclassmen to participate or observe the team so that they can build a legacy around the skill sets needed to be ready to go when they become seniors,” Kozul said.

Kozul and team members say their success isn’t really about weight and stored energy, but about people. Kozul stressed support from the leaders of the engineering school, including Interim Dean Joanne Belovich and Associate Dean Brian Davis, and school facilities including the Parker Hannifin Human Motion and Control Laboratory and the Dan T. Moore MakerSpace. “You couldn’t ask for better facilities,” he said.

“I think it was the team,” said Rea. “We had a lot of different skill sets.”

“I’ve worked with a lot of teams over the years, both at Parker Hannifin and at CSU, and I’ve never met a team that was so internally motivated,” said Kozul. “They did not get this from me. They were really just genuinely curious and had a great project to explore their curiosity to the point that I’ve never met a team with this type of DNA before.”

To learn more about the Washkewicz College of Engineering and the Senior Design program please visit their website.