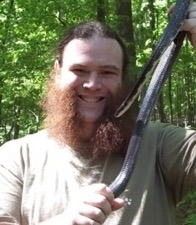 Dr. Henry Astley is currently an Assistant Professor in the Biomimicry Research & Innovation Center at the University of Akron, with research interests in comparative biomechanics and bio-inspired robotics, particularly the locomotion of snakes, frogs, and early tetrapods. He originally studied Aerospace Engineering, getting his B.S. from Florida Institute of Technology in 2001, before switching to biology at the University of Cincinnati, where he got a second B.S and an M.S in biology (2005 & 2008) while working on arboreal snake locomotion.  Dr. Astley studied elastic mechanisms in frog jumping during his Ph.D. at Brown University (2013), followed by post-doctoral work at Georgia Institute of Technology on sidewinding locomotion in snakes.