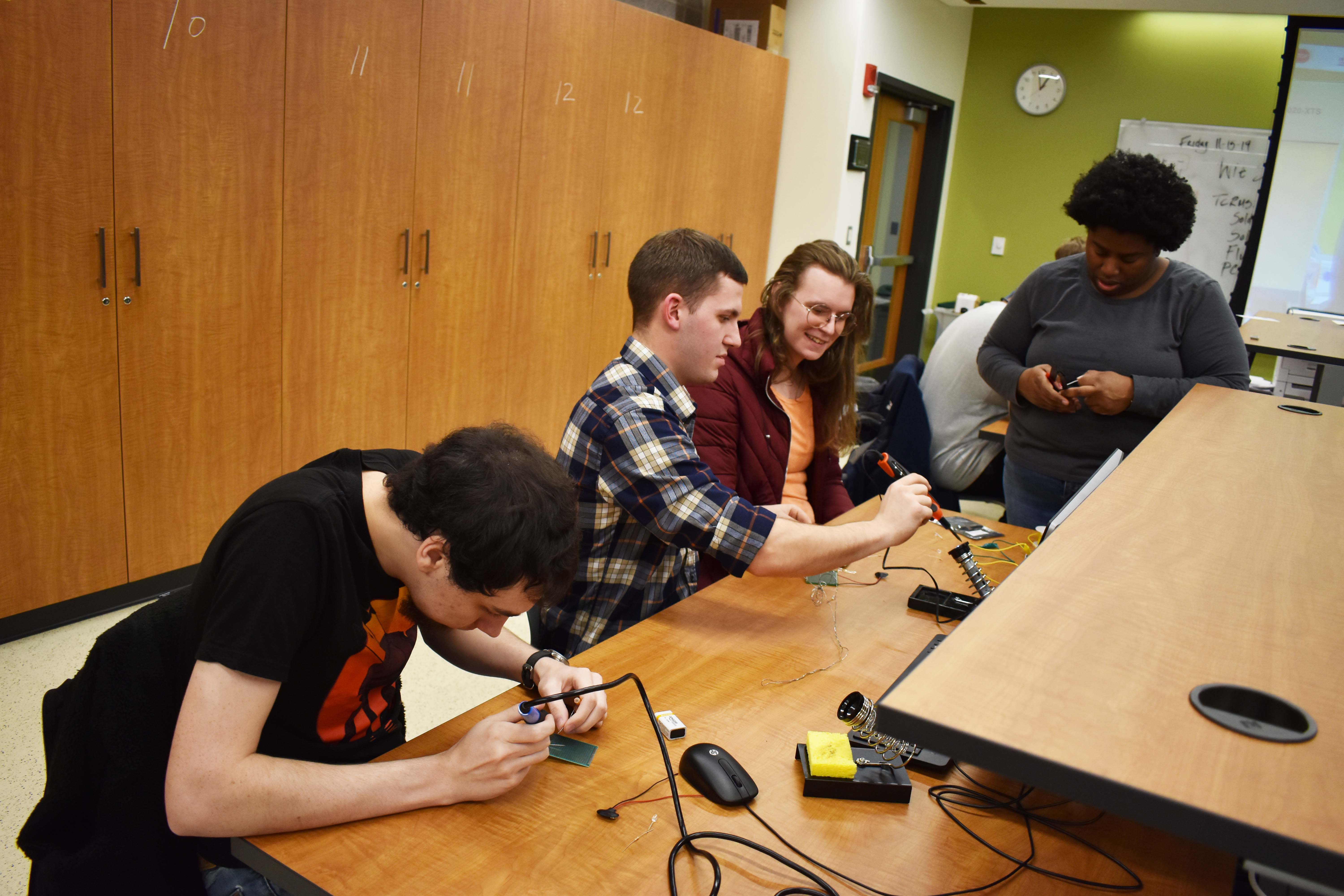 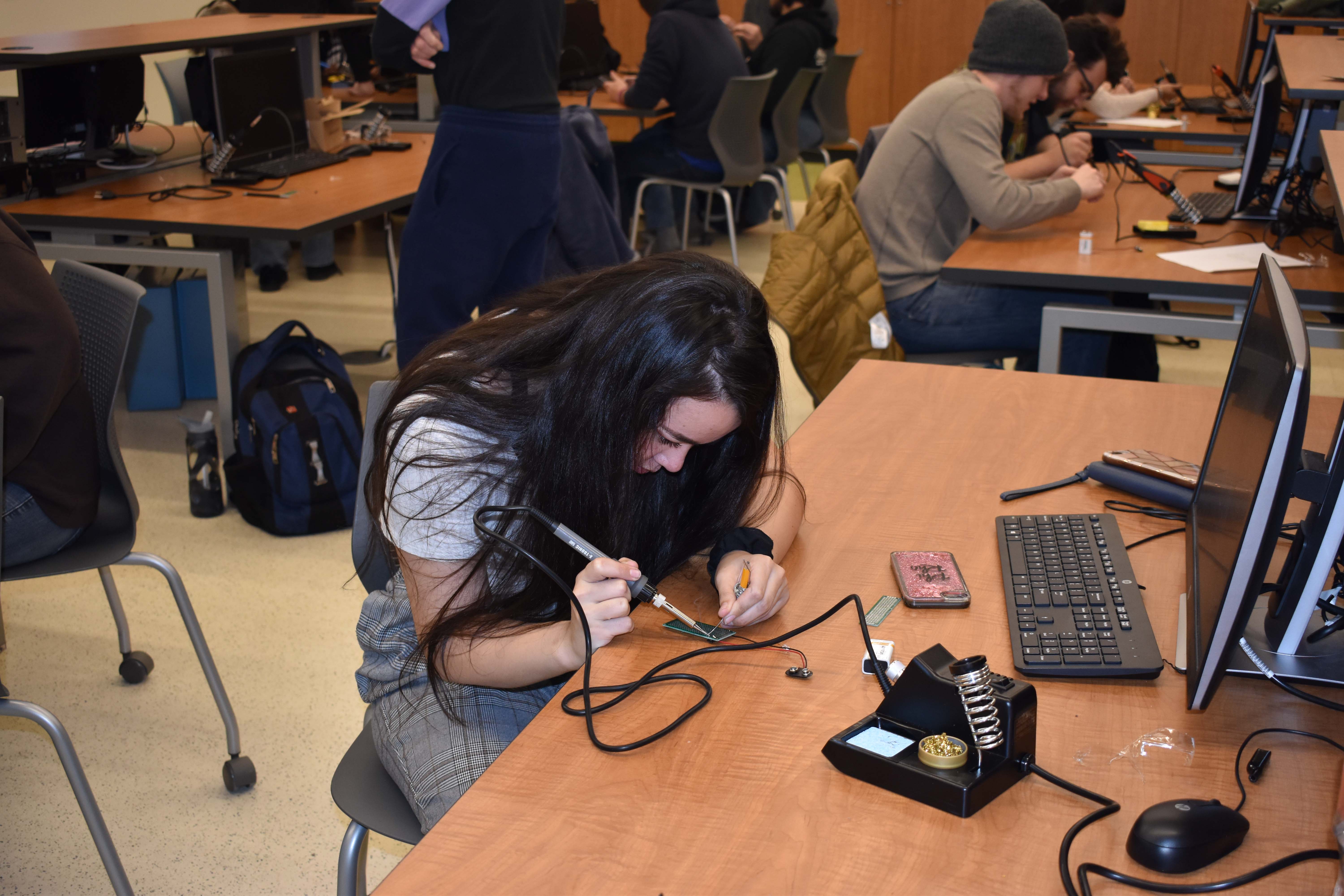 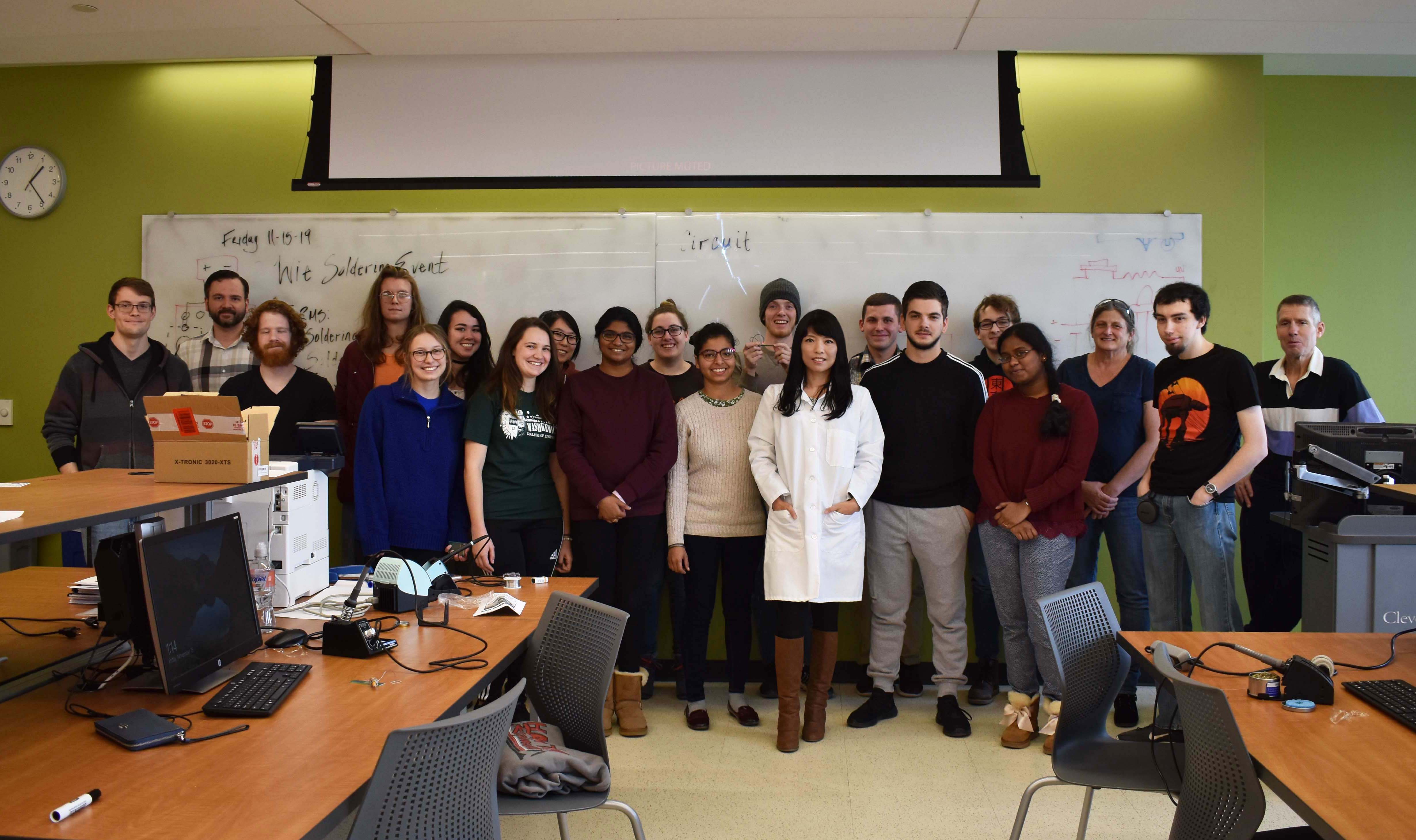 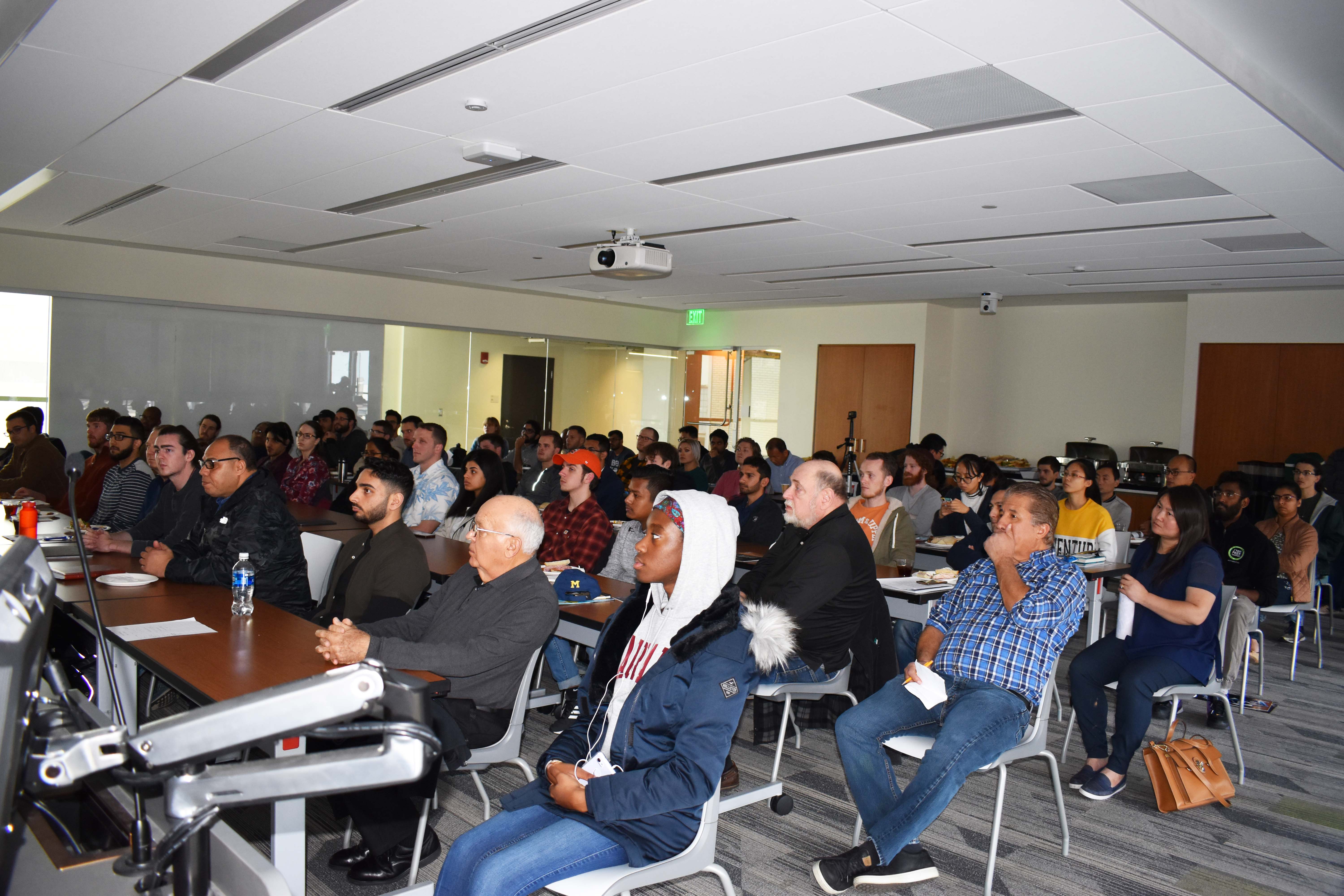 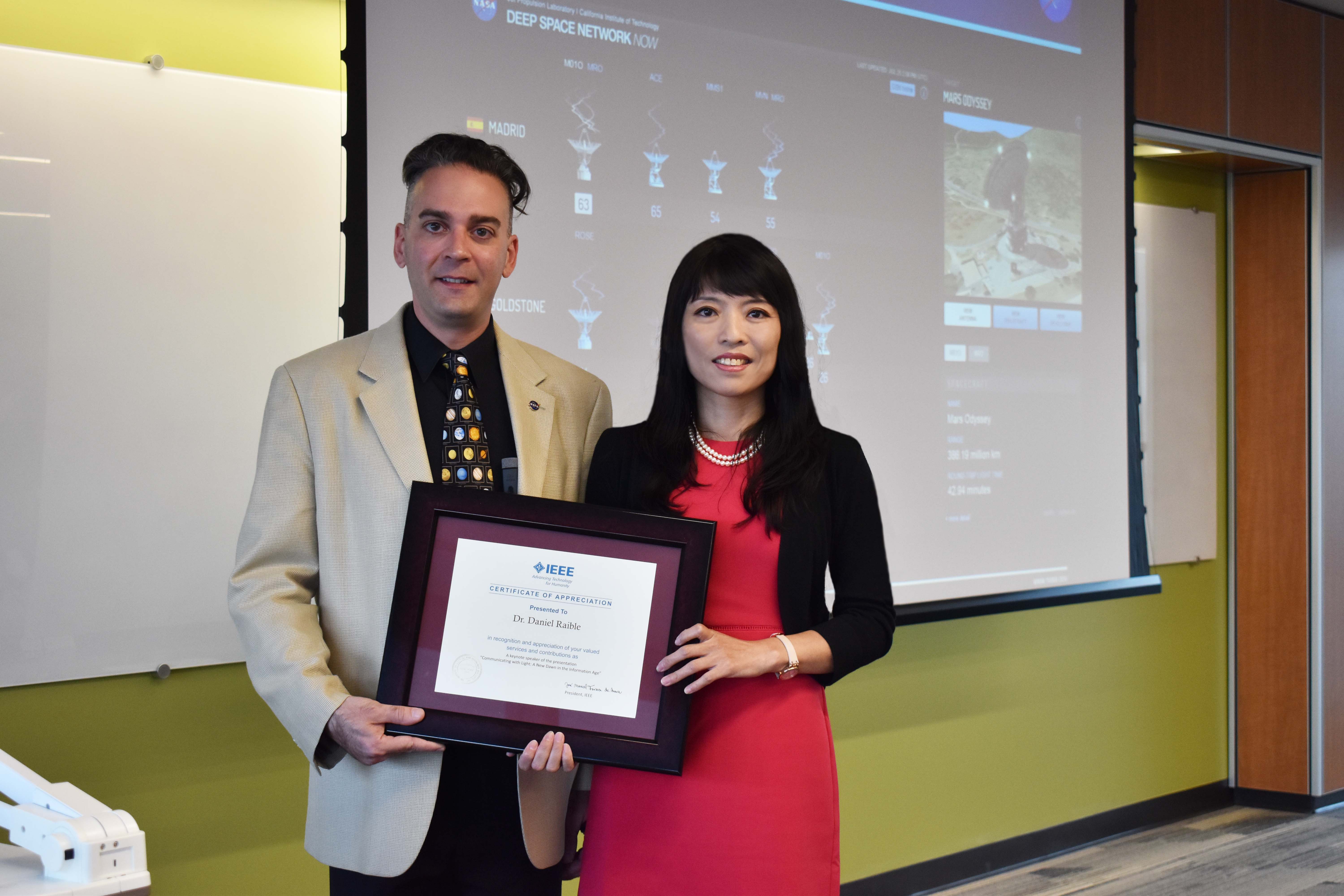 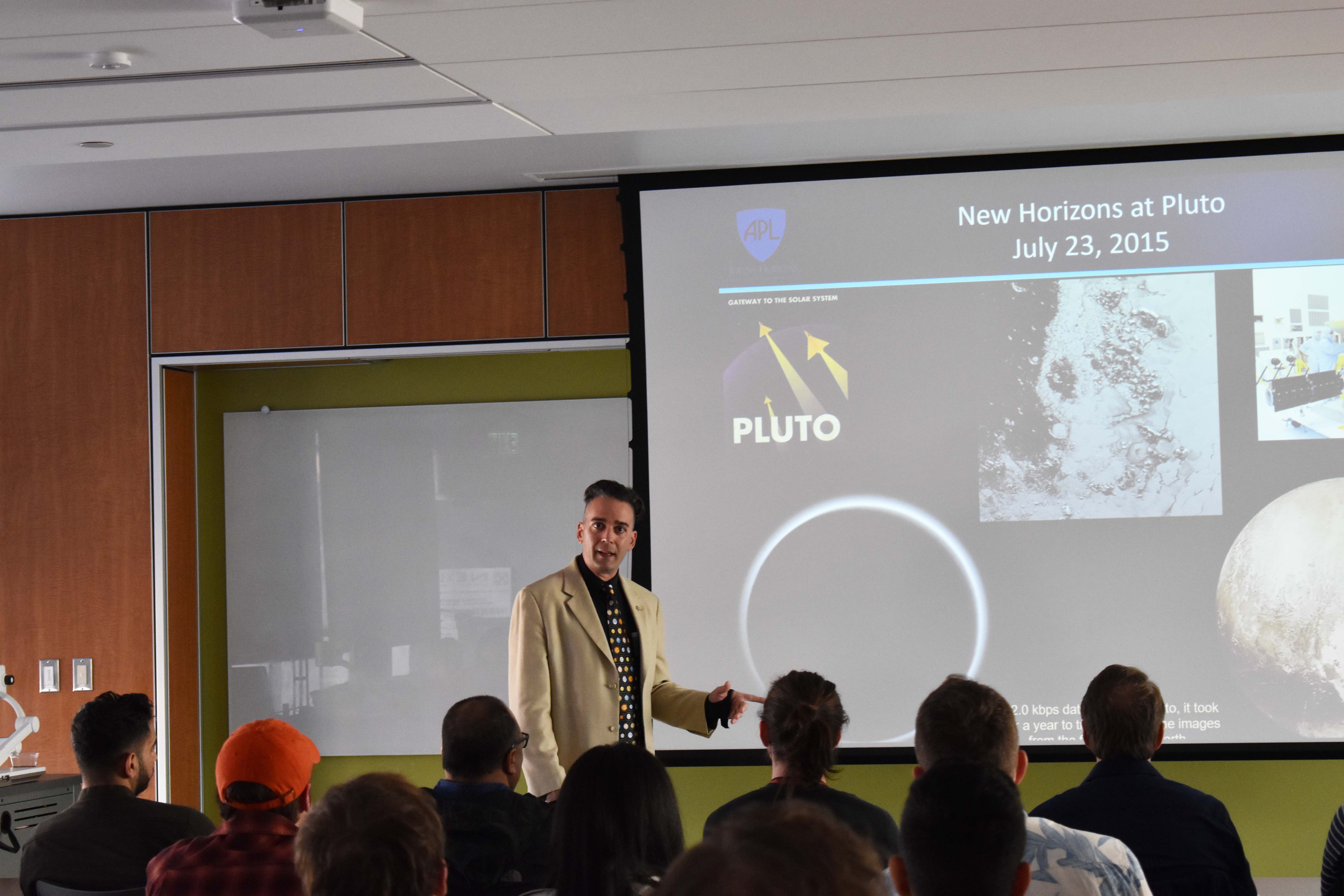 The Eta Kappa Nu honors society at CSU and IEEE control Systems Society jointly presented an academic seminar on “Communicating with Light: A New Dawn in the Information Age” in WH 405 between 3:00-6:00pm on Nov. 1, 2019. During the seminar, Dr. Daniel Raible, a researcher and electronics engineer from the NASA John H. Glenn Research Center, gave a keynote speech about the emergence of laser technology to provide communication and navigation services to spacecraft throughout the solar system.  The speech was interdisciplinary, including engineering, science, technology, and management. Dr. Raible not only introduced the current research and development efforts at NASA to enhance system performance, but also shared his own career development, insight, and experiences. The seminar attracted 71 audiences, among which there were 60 CSU students, 8 CSU professors, and 3 local industrial engineers. Through the seminar, the audience acquired some further insight into the current development and future potential of the space communication. 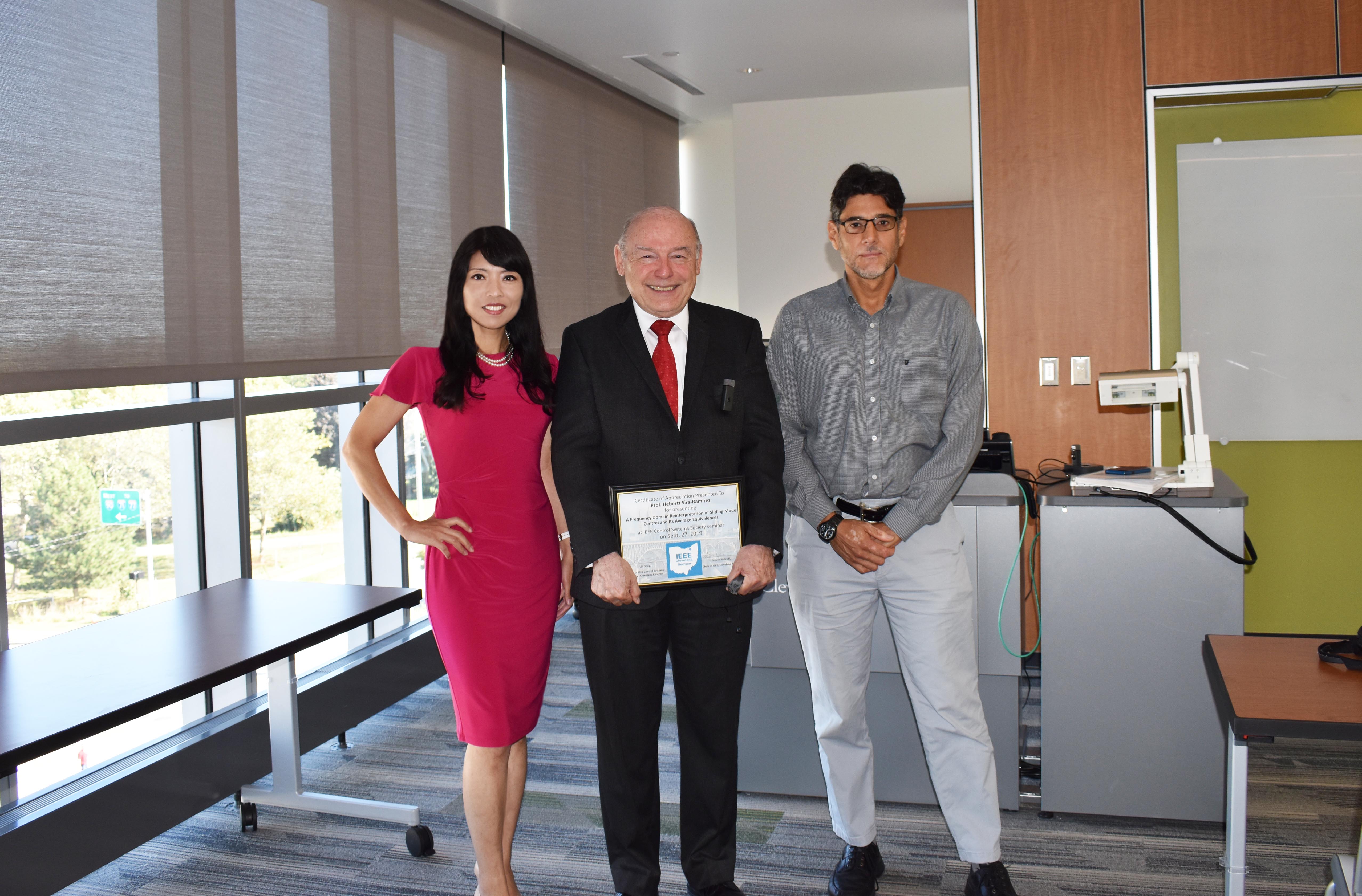 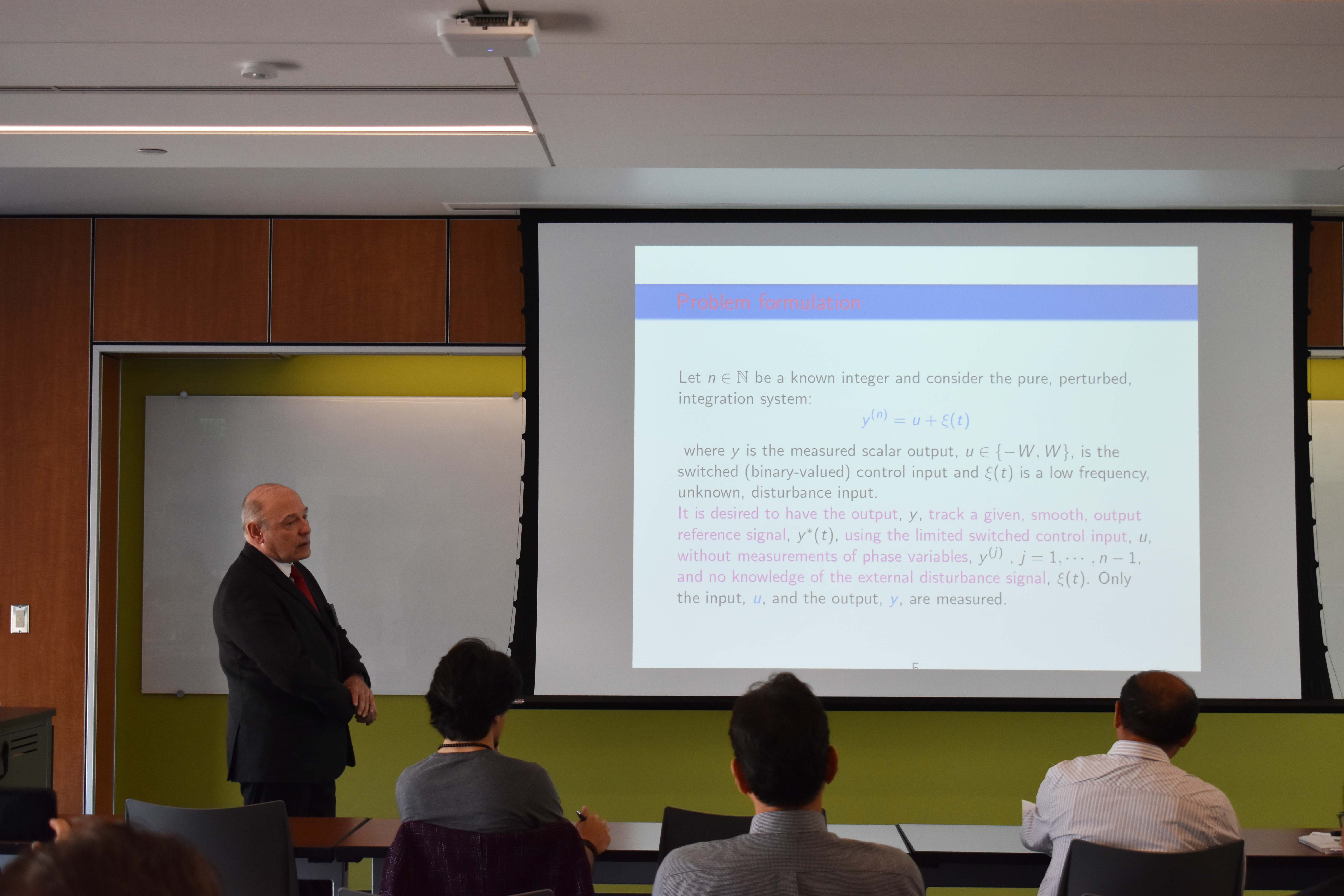 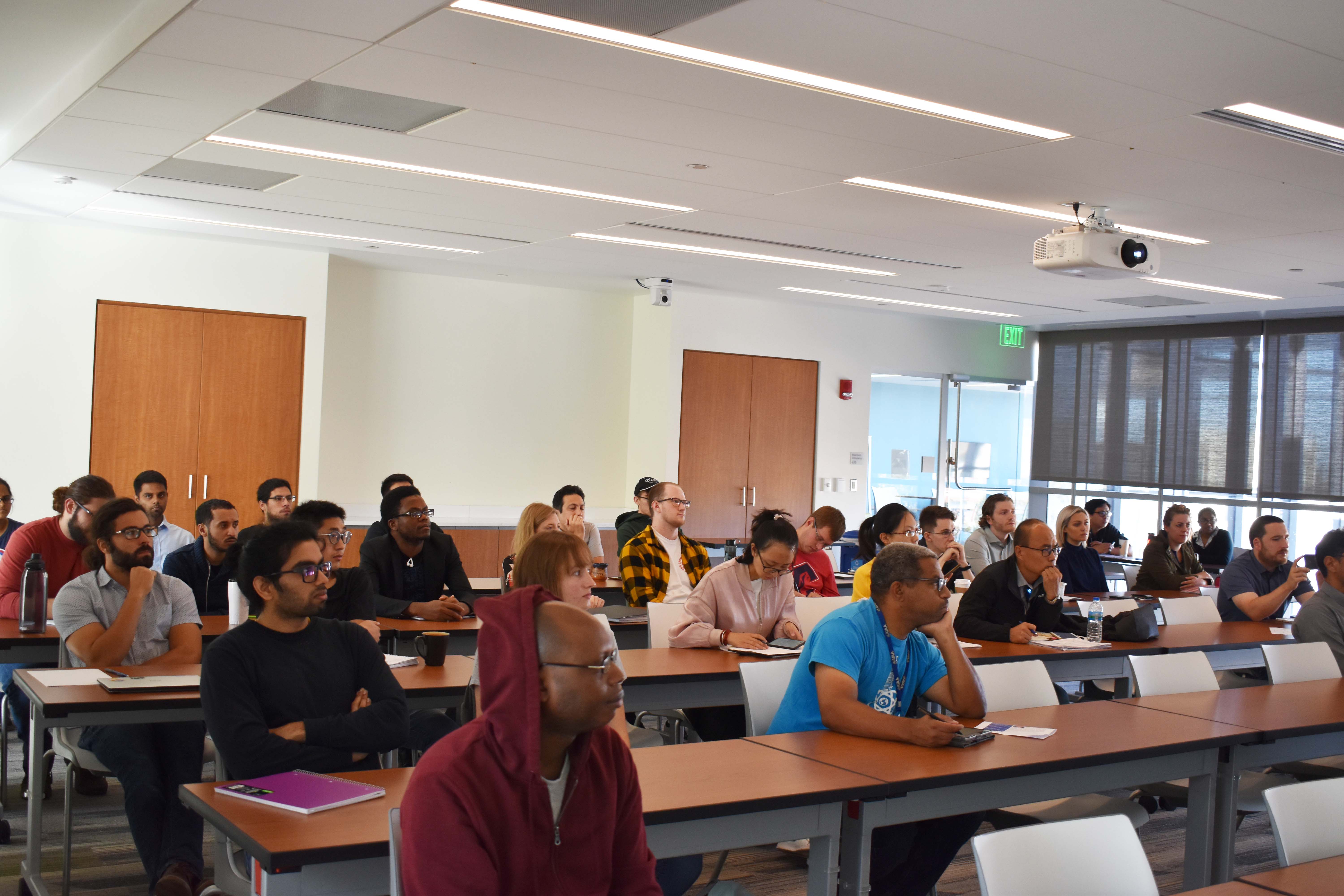 Eta Kappa Nu (HKN) honor society at CSU and IEEE Control Systems Society, Cleveland Chapter jointly presented a seminar on Sept. 27, 2019 between 10:30Am and 12:00Pm in WH405. The seminar featured a keynote speech delivered by Prof. Hebertt Sira-Ramirez, a Titular Researcher in Cinvestav, National Polytechnic Institute, Mexico. The title of his presentation is “A frequency domain reinterpretation of sliding mode control and its average equivalences”. In the presentation, Prof. Sira-Ramirez not only discussed the control theory of sliding mode controller in terms of classical compensation networks, but also demonstrated application examples and experimental results. Dr. Zhiqiang Gao gave an opening remark for the seminar. Dr. Lili Dong and Dr. Hanz Richter co-hosted the event. Dr. Dong also presented the speaker an IEEE Certificate of Appreciation. The HKN officers set up the room and videotaped the speaker’s presentation. The seminar attracted 36 attendees, a majority of which are the engineering students at CSU. 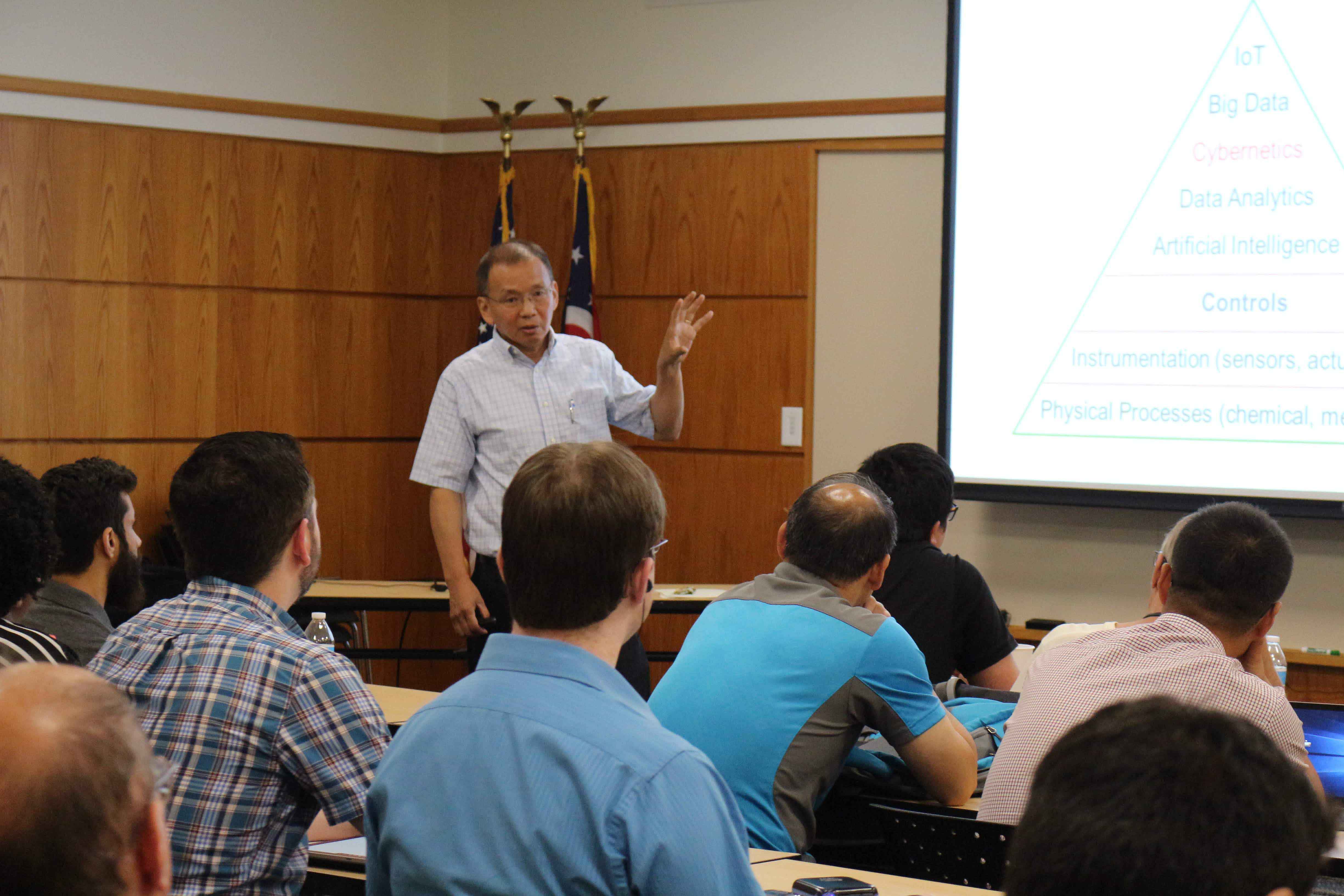 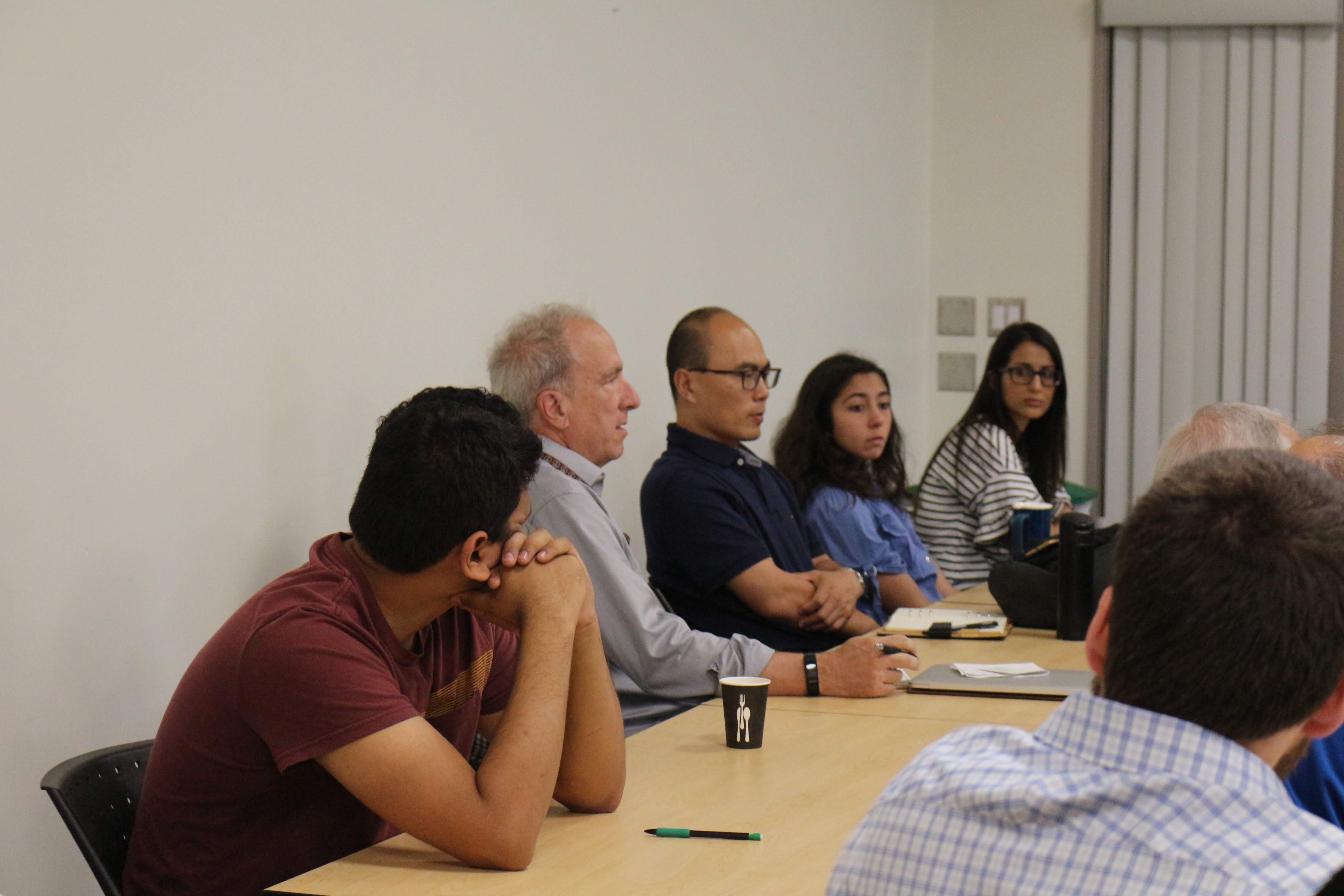 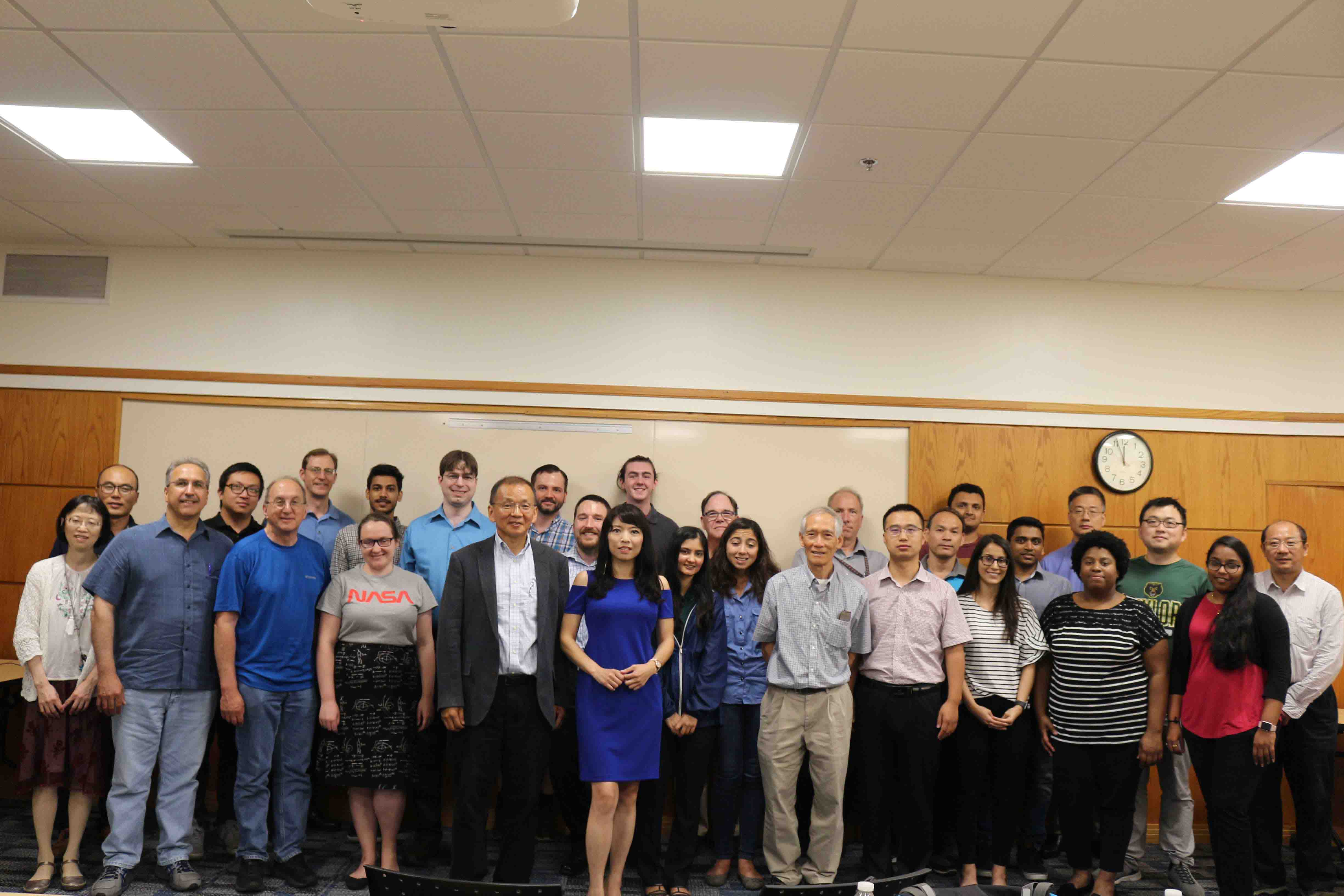 Mr. Steven Galecki, Chair of the IEEE Cleveland Section gave the opening remarks, introducing IEEE and the ADRC research program at CSU. Mr. Jack Kraszewski and Ben Ward from the CSU Research Office then introduced the CSU research programs and mechanisms for industry collaborations. Next, an ADRC tutorial was given by Dr. Zhiqiang Gao from CSU, titled “ADRC: 20 years in the making”, where he traced an indomitable idea from H.S. Tsien as it passes through the hands of Guan Zhaozhi, and materialized as ADRC by Han Jingqing some 20 years ago. Dr. Gao showed, with two undisputed examples, what ADRC made possible that would otherwise be impossible, together with a full agenda for current and future research. Following the tutorial, the theoretical development of ADRC was presented by Drs.  Wenchao Xue Sally Shao, Wen Tan, and Xiangyang Li. The application side of workshop covers many aspects of engineering practice. Drs. Frank Li, Lili Dong, Li Sun, and Qinling Zheng presented the ADRC as a practical solution to real-world problems. Anusree Mandali, the only student presenter, discussed her latest research on voltage control in power system operations.

What perhaps stands out in this event has been the participation from engineers, such as those from NASA and Bendix etc., in most if not all presentations. Their sharp and pertinent questions bring the context on which the discussions are grounded. They are particularly illuminating for the academic researchers. 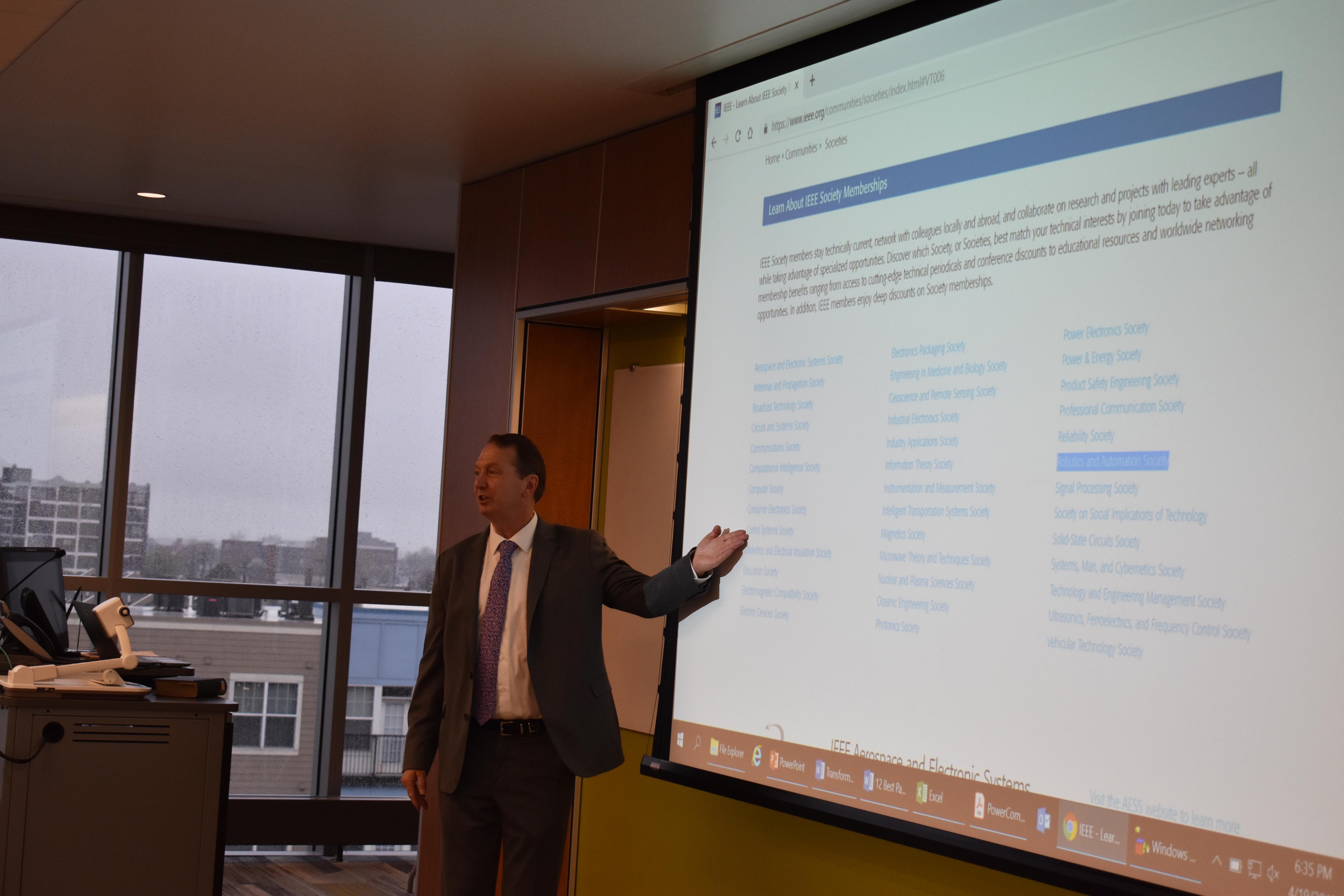 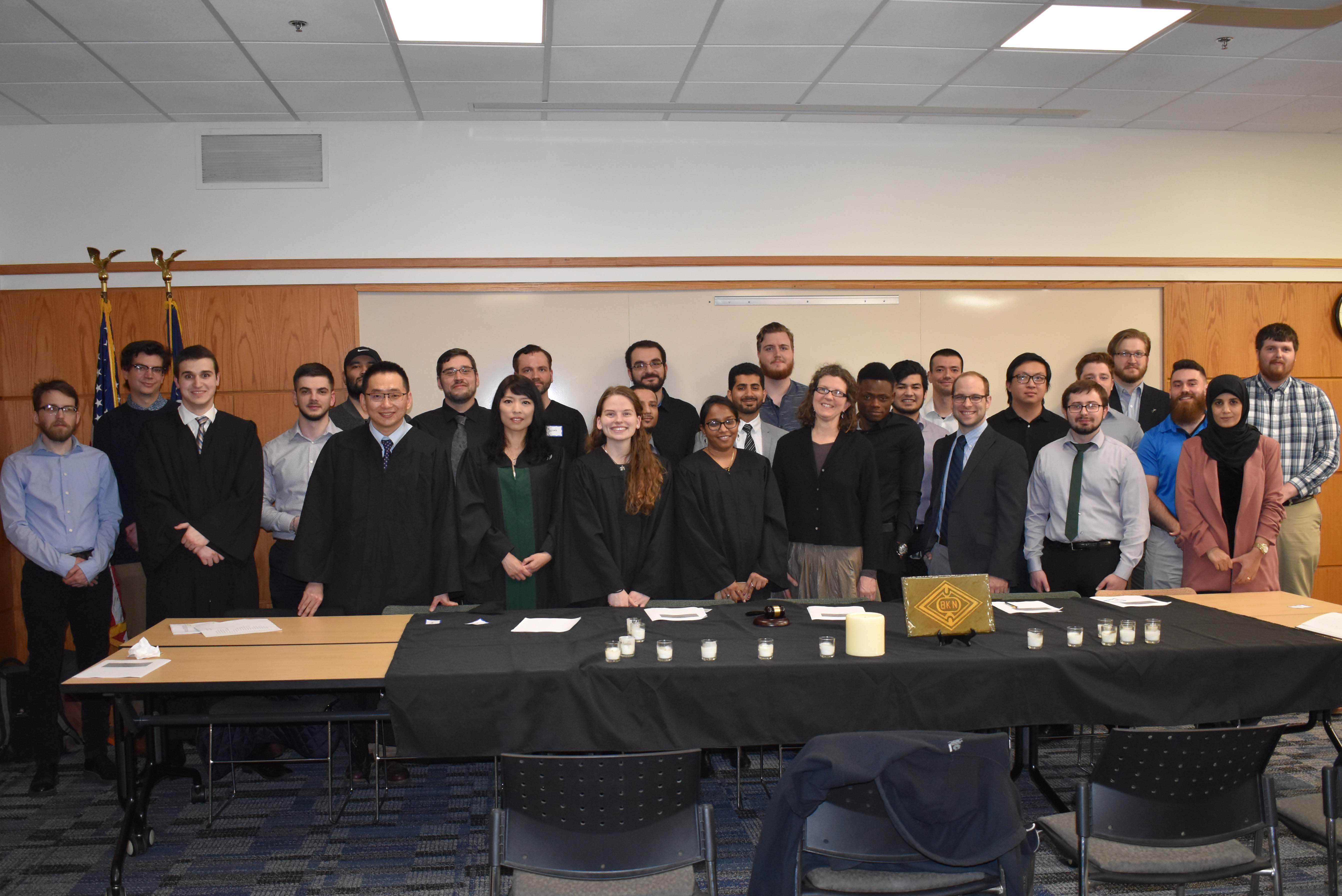 Eta Kappa Nu, the honor society of IEEE, had an induction ceremony on April 19, 2019. There are 21 outstanding EECS students who were inducted into HKN. The impressive induction ceremony was carried out by HKN faculty advisor Dr. Lili Dong and student officers Anusree Mandali, Kelsey Letizio, Mark Travis, Shubo Zhang, and Anson  Bajramaj. In the dinner reception after the ceremony, Dr. Allen Morinec delivered a powerful presentation entitled "Get the Job and Keep it". In the presentation, Dr. Morinec shared his over 30 years of industrial experiences in career development, and encouraged the inductees to be successful. The inductees and their families and fiends joined the reception. 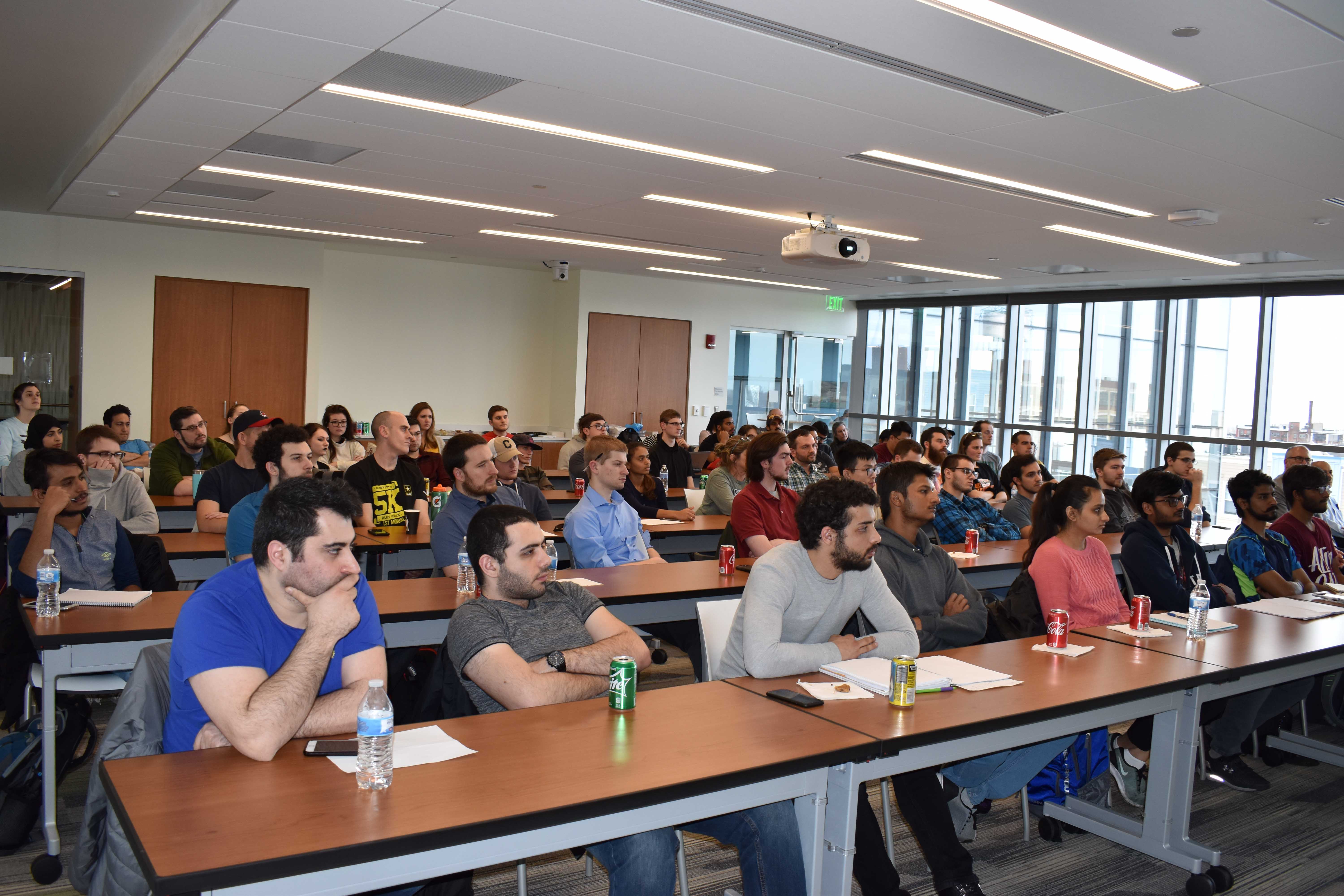 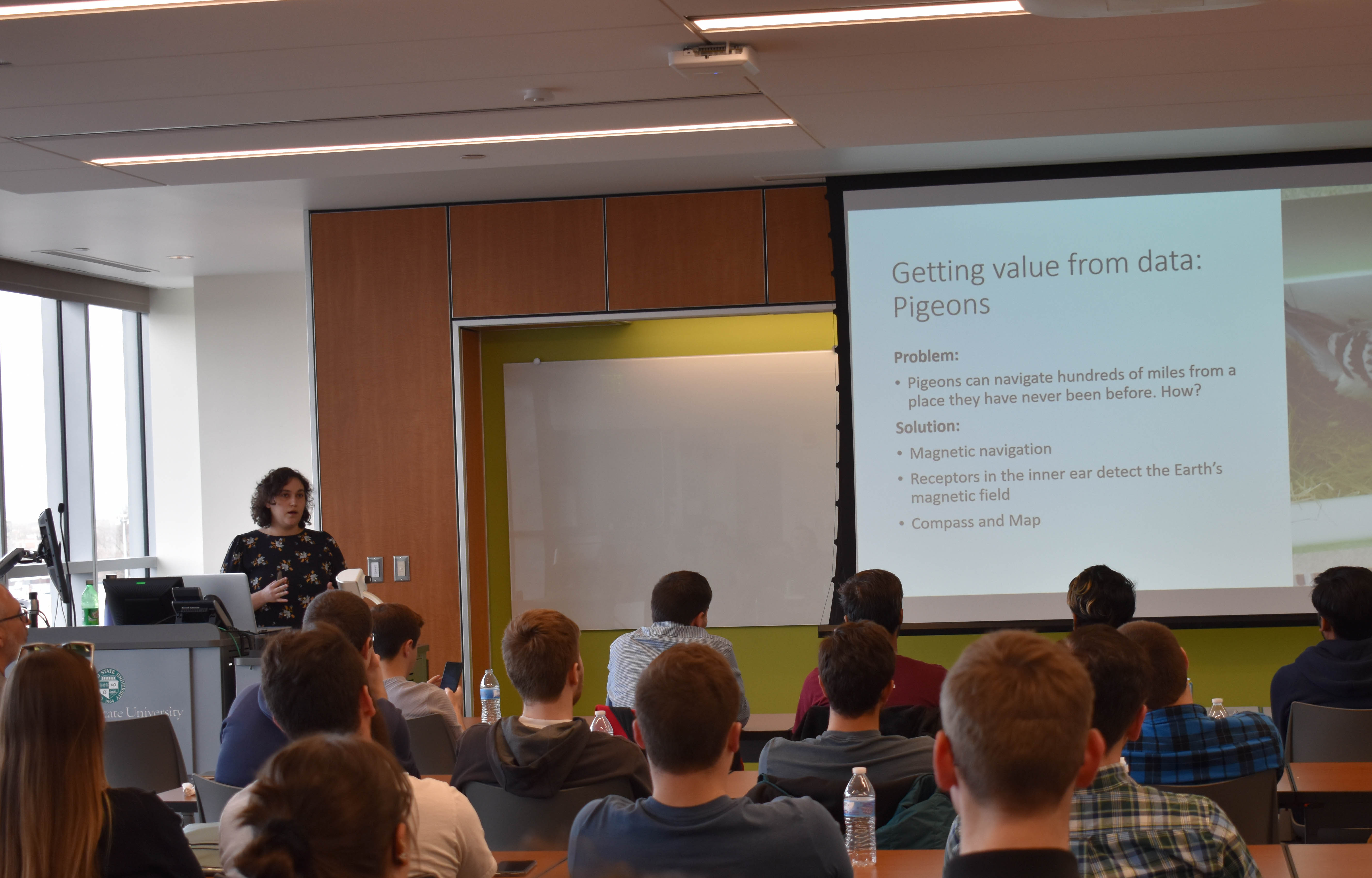 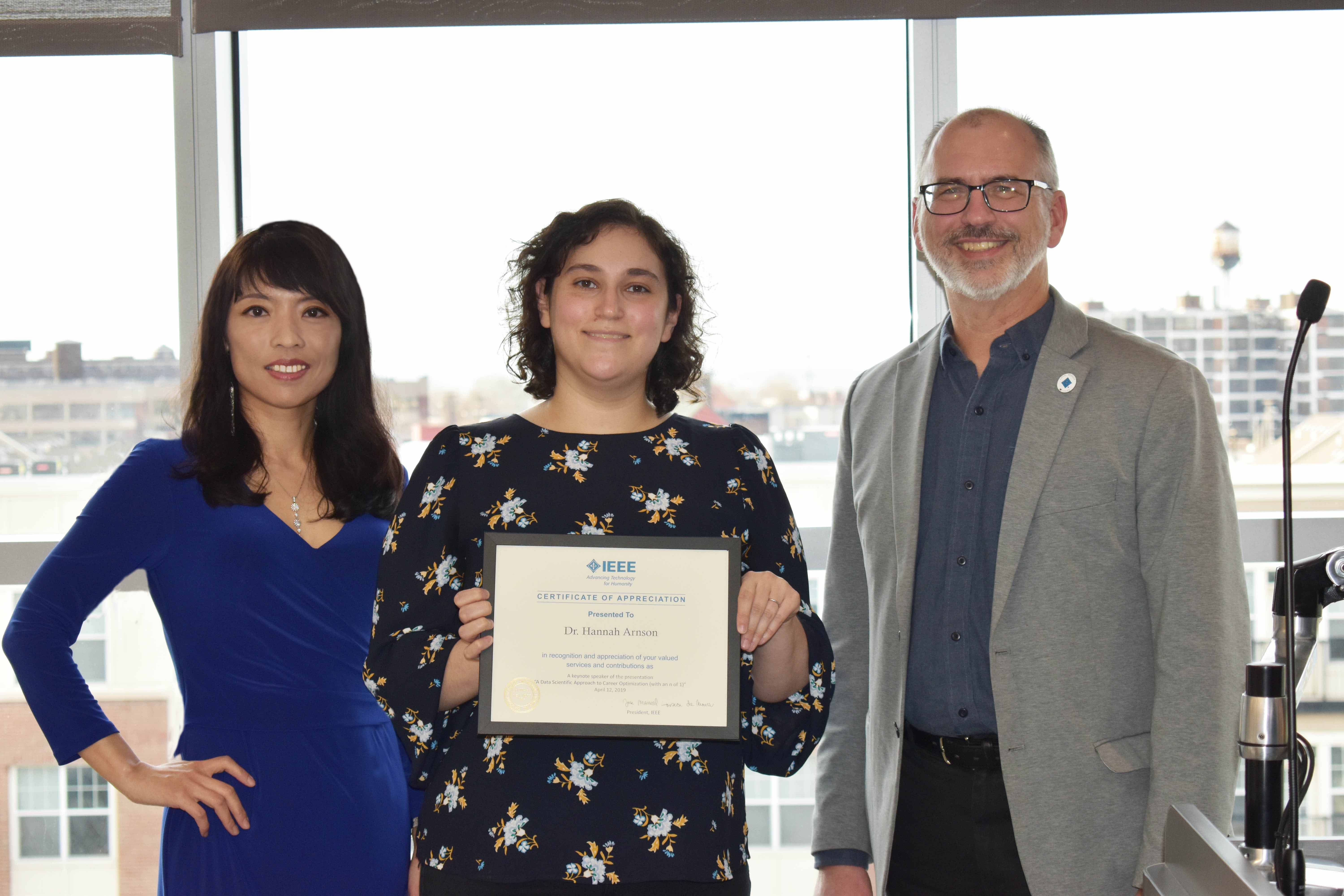 Dr. Lili Dong successfully organized and hosted an IEEE Women-in-Engineering seminar on April 12, 2019  at CSU. The seminar featured an opening remarks delivered by Mr. Steve Galecki, the chair of IEEE, Cleveland Section. Then Dr. Hannah Arnson, a lead data scientist from PanData LLC, gave a keynote speech entitled "A Data Scientific Approach to Career Optimization (with n=1)". Lately, Data Science has been receiving a lot of press as the career of the future. Dr. Hannah Arnson talked about her engineering-adjacent career path from neuroscientist to data scientist. She imparted career lessons extrapolated from a rich personal data set. The event has attracted about 65 attendees, including the students and faculty/staff members from CSU and CASE, and local industrial engineers. The room was over crowded with curious listeners. The audiences evaluated the presentation as informative, inspirational, and courageous. This IEEE WIE seminar was sponsored by IEEE, Cleveland Section. 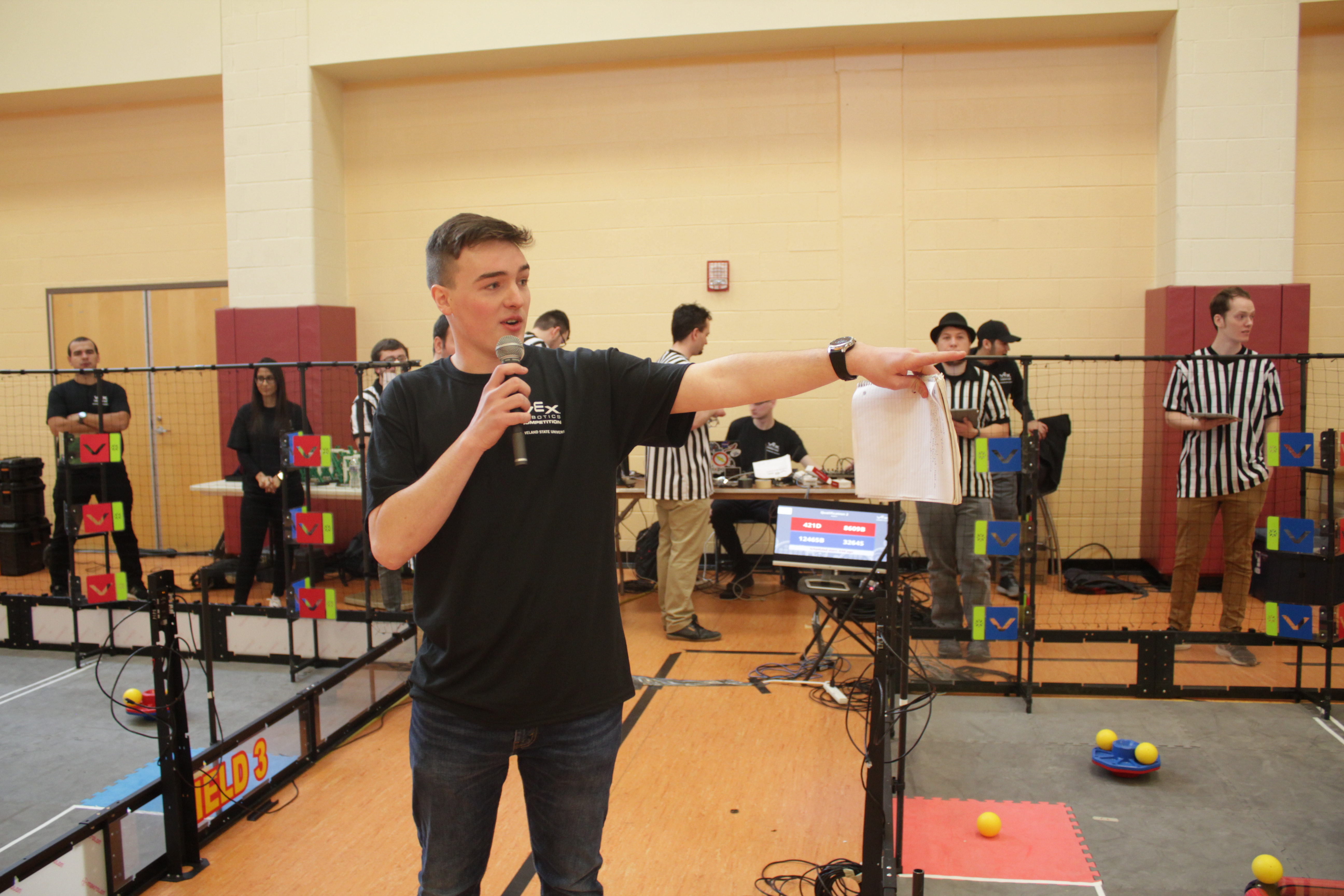 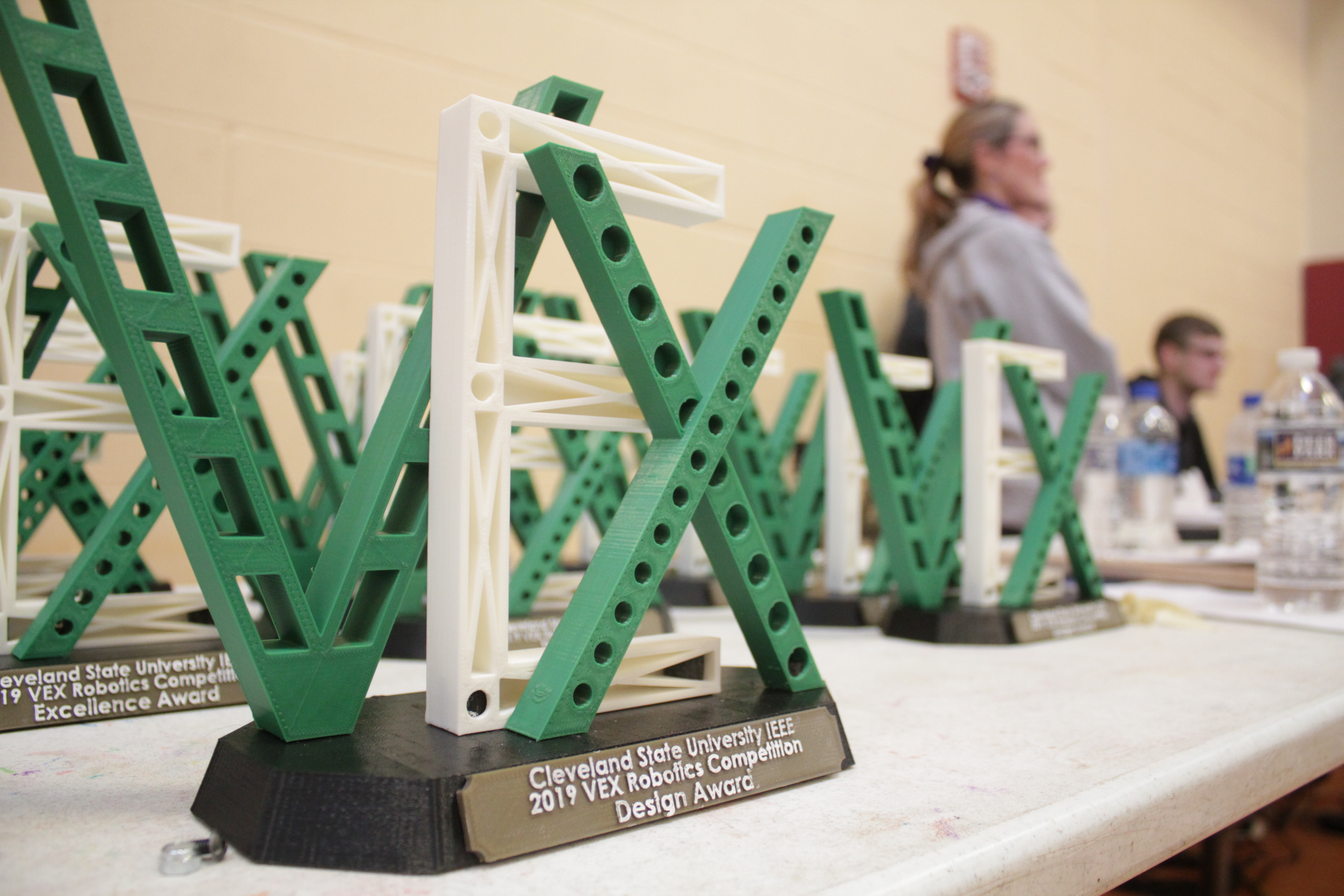 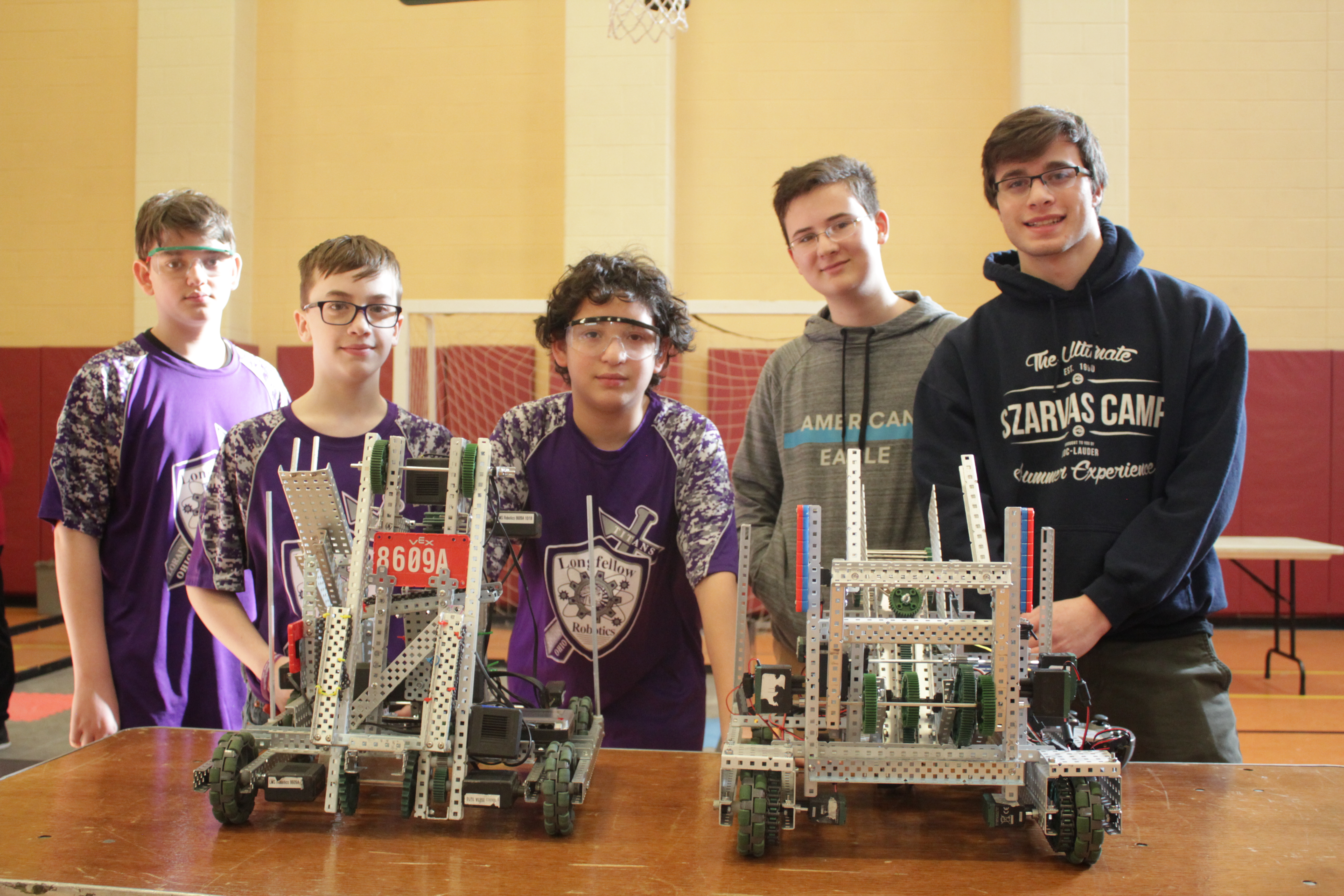 The CSU branch of IEEE successfully organized and hosted an annual VEX Robotics Competition event on Feb. 2, 2019 at the Recreation Center of CSU. The event provides a great opportunity for high school and middle school students to engage themselves in STEM activities that promote teamwork, communication, sportsmanship, and education. The competition involved 32 teams (or 128 students) from 10 different high schools and middle schools in Ohio. Every robotics team designs a robot to carry out certain tasks on a playing field. This year the tasks involve several different skills that the robot must be capable of to be competitive. These skills include climbing small pedestals, throwing plastic balls to score flags, and flipping plastic disks throughout the field. These games combine multi-disciplinary engineering fields including mechanical, electrical, and computer engineering, and computer science. The VEX Robotics program gives these college-bound students an advantage over their peers having already been exposed to so many fundamental concepts taught in early engineering courses.

There are over 20 CSU student volunteers throughout the day of the event. Specifically, the EECS students Derek Woods, Stephen Matz, Amani Hamideh, Andrey Yushchishin, Michael DiPiero, Daniel Quintano and Dylan Doyle all deserve recognition for their work in the different stages of the event. IEEE student officer Jacob Richey is the major organizer of the event. IEEE President and Vice President, Brighid Rancour and Mark Travis help planning and organizing the events.  The competition will continue in Spring 2020.